All PR professionals have that one client project that seems to take over everything.

It means long hours at the office, lack of sleep (which leads to copious amounts of caffeine), around the clock emails and being on your feet for hours at a time.

For those of us who work on The Salvation Army of Metro Detroit account, our crunch time is Red Kettle season. This Christmas season’s fundraising campaign aimed to raise more than $8 million dollars in 80 days…

To achieve our goals in that timeframe, events needed to be planned and attended, media materials written and distributed, and interviews coordinated.  And that’s just scratching the surface.

With such a huge task it’s easy to feel overwhelmed by the stress, but somehow we always manage to have fun with it. Here are some of our favorite moments from this past season as we reflect on our 80 day PR campaign.

“This was my fourth Red Kettle Campaign and I continue to find myself amazed every January with the mysterious moment each year when “the holidays being a long way off” suddenly shifts to “the holidays are here” and our entire team is off and running . . . and then it’s over in a flash. Armed with the Red Kettle plans we strategize year ‘round, we navigate the frenzy of announcements, events and the occasional Krugerrand donation, adjusting our approach with each new opportunity.” Roary and PAWS are always big hits at Red Kettle events. Peek-a-boo is a fan favorite and Andrea and Pat never pass up an opportunity to pose with the beloved team mascots.

The team posing with The Salvation Army gingerbread house at Royal Park Hotel. Visitors were invited to sponsor “mittens” to help provide warm clothing items for families and their children served by The Salvation Army of Metro Detroit.

“I was hired at the very start of the Red Kettle campaign. I had little time to get to know The Salvation Army before diving head-first into its most busy time of the year. But now, looking back at those 80 days, I know I could not have asked for a better and more exciting start to my professional PR career. I especially enjoyed working at events while taking photos for The Salvation Army’s social media pages. It was so much fun speaking with event attendees and hearing how The Salvation Army has impacted their life.” “This is my fourth Red Kettle season so it’s difficult to choose a favorite Salvation Army event. There are so many! I love being involved with the annual Royal Park Hotel gingerbread house event. The side benefit of coordinating this mini PR campaign? You get to eat amazing, delicious desserts prepared by executive pastry chef, Mark Slessor.” Selfies are a must for Celebrity Bell Ringing Day 2015. Andrea found time amidst the fun and snapped one with WWJ Newsradio 950’s Brooke Allen and volunteers from The Salvation Army of Warren. Brooke and other local celebs from television, radio and print media helped raise more than $6,000 in two hours! We get to meet tons of celebrities this time of year! Detroit Tigers mascot, Santa PAWS joined the Red Kettle action by recording a #RingOrSing video encouraging metro Detroiters to sign up as Salvation Army volunteer bell ringers.

“I had mentally prepared to be crazy busy during the campaign. What I hadn’t planned for was the amount of fun we would have during the season. My favorite memory comes from Red Wings for Red Kettles. I grew up a Red Wings fan and have spent countless nights at The Joe cheering them on. So, meeting Riley Sheahan, Dylan Larkin and Luke Glendenning  while they had fun competing to raise money for The Salvation Army was an experience I’ll never forget.”

The Red Kettle Campaign is truly a learning experience. With its disproportionate shape, carrying a heavy kettle stand is not an easy task. So we adapt. 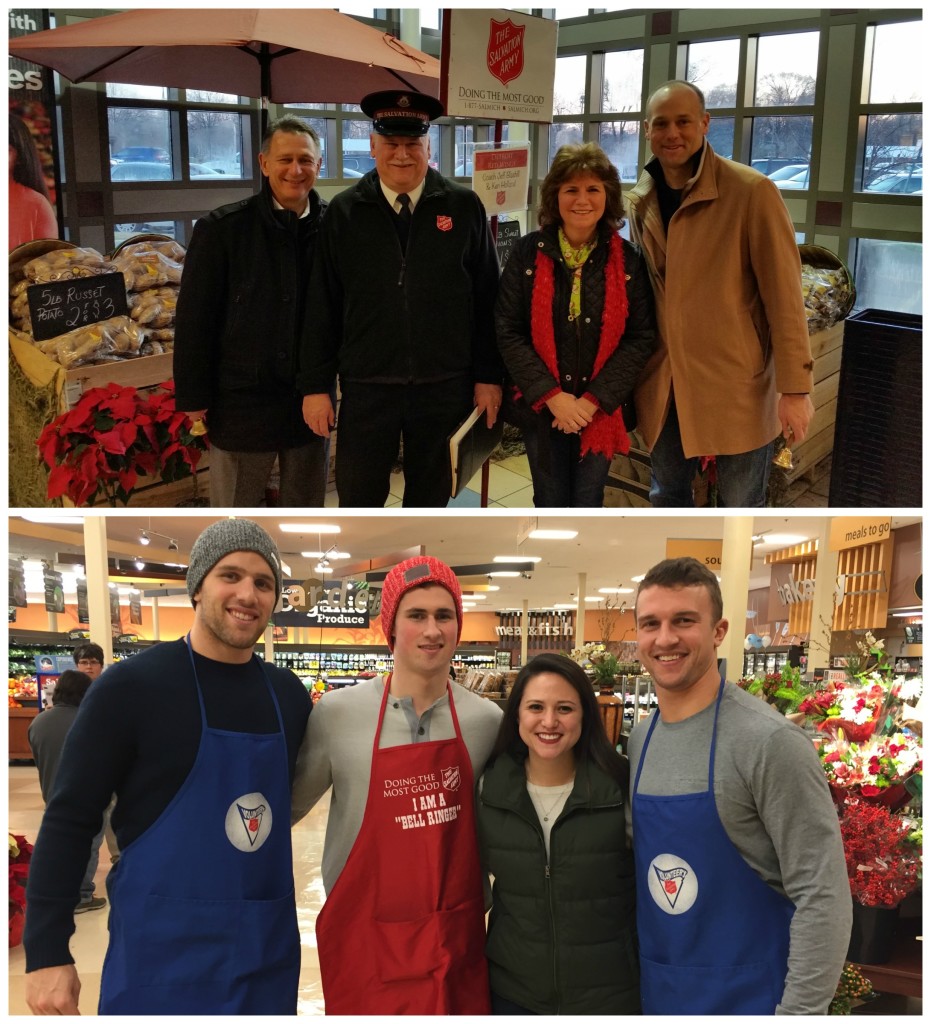 We celebrated 10 years of partnership between The Salvation Army and the Detroit Red Wings. Each year Red Wings players and staff compete for bragging rights to see which group can raise the most money as part of Red Wings for Red Kettles. Pat was on location with Head Coach Jeff Blashill and General Manager Ken Holland ringing bells with Major Russ Sjögren. Meanwhile, Sasha contained her inner fan girl as she joined Riley Sheahan, Dylan Larkin and Luke Glendenning.

What’s your “Red Kettle” project? Share it in the comments.